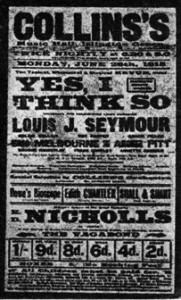 Unfortunately, Gracie’s name is in such small print on the poster that it is illegible on this photo

In 1915, (after learning tap-dancing in Manchester), Gracie signed a 10 year contract with Manchester agent Percy Hall, this guaranteed her a princely £5 a week!

Percy found her a part in a revue playing round the Manchester area called ‘Yes I Think So’. The principal comedian in the show being Archie Pitt, fate putting together a talented impresario with Svengali like talents and an actress with the greatest of star potentials.

Gracie always carried a small autograph book with her, and on her birthday during the run of this review Archie wrote in it: ‘To Gracie Fields. One day you are going to be a big star.’

With thanks to Keith Dalby-Oldham for the following research and information . . .

The Topical and Whimsical and Musical Revue

Including the Celebrated Light Comedian

May Sherrard the female “Dan Leno”

Le More with his thought-reading dog

“Are t’ gooin’ to th’ Hipp this week?” is often asked; and often the reply is “Yes, I think so.” Probably as the quality of this week’s programme has been made known the replies will be more definitely in the affirmative.

“Yes, I Think So” is the title of the revue being presented by Louis J Seymour and a company of stars together with smart variety turns on their own.

Scene 1 opens in the Walpole Night Cub, a bright and dressy spectacle with good songs and smart dances. Scene 2 Charing Cross Station is largely devoted to humour, principally a delightful comedy love scene between John Wilton (bogus porter) and Flora Rey, a demure damsel who develops the “courting” with fine effect. With a smart, swinging chorus the whole troupe depart for Egypt where the Dream Dancer (Annette Cambrai) gives a graceful performance preceding a gorgeous Egyptian ballet of sweet song and graceful dance. A matrimonial agency run by Wilson and Charlie Haplin proves a source of great mirth followed by a joyous finale where the hero (Harry Gordon) and Marie St Clair are married.

Apart from its excellent spectacular and humourous features the piece is liberally interspersed with fine vocalism. Harry Gordon (L J Seymour) gives several clever songs, the best being “Where the Boys Are”, a touching and inspiring military melody and he also scores in a duet “Yes, I Think So” with Marie (Goldie Collins). Gracie Fields (as Gracie Darling) sings with effect, especially “Mississippi Lu” and other good songs are given including a new tongue twister by Wilton. The latter scores in many scenes, the part being played by Archie Pitt. Eric Melbourne is a source of great fun as “Charlie Haplin” one of the best imitators of the one and only “Charlie Chaplin” we have seen on film or in the flesh. Messrs Frank Hartley, Brook Kimberley, Misses May Harper, Dorothy Dalton, Eva Dalton all figure in the show, three dancing girls give sweet performances and the ballet are tuneful and well-dressed. Louis Seymour, the central figure, also displays several smart specimens of the art of the tailor. Le More, the Belgian, pays a welcome return visit with his clever dog “Polly” which displays wonderful sagacity and almost human intelligence. Hovis Brothers give a clever cross-talking act and the last but not least mention must be made of May Sherrard, character comedienne, whose songs “When We Get To Berlin” and “He Plays At Tippet” brought down the house. Mr O’Callaghan’s band give a sprightly Scotch overture and Mr Cecil Howarth conducts for the revue the lyrics of which are by Mr Chas B Baker, general manager.