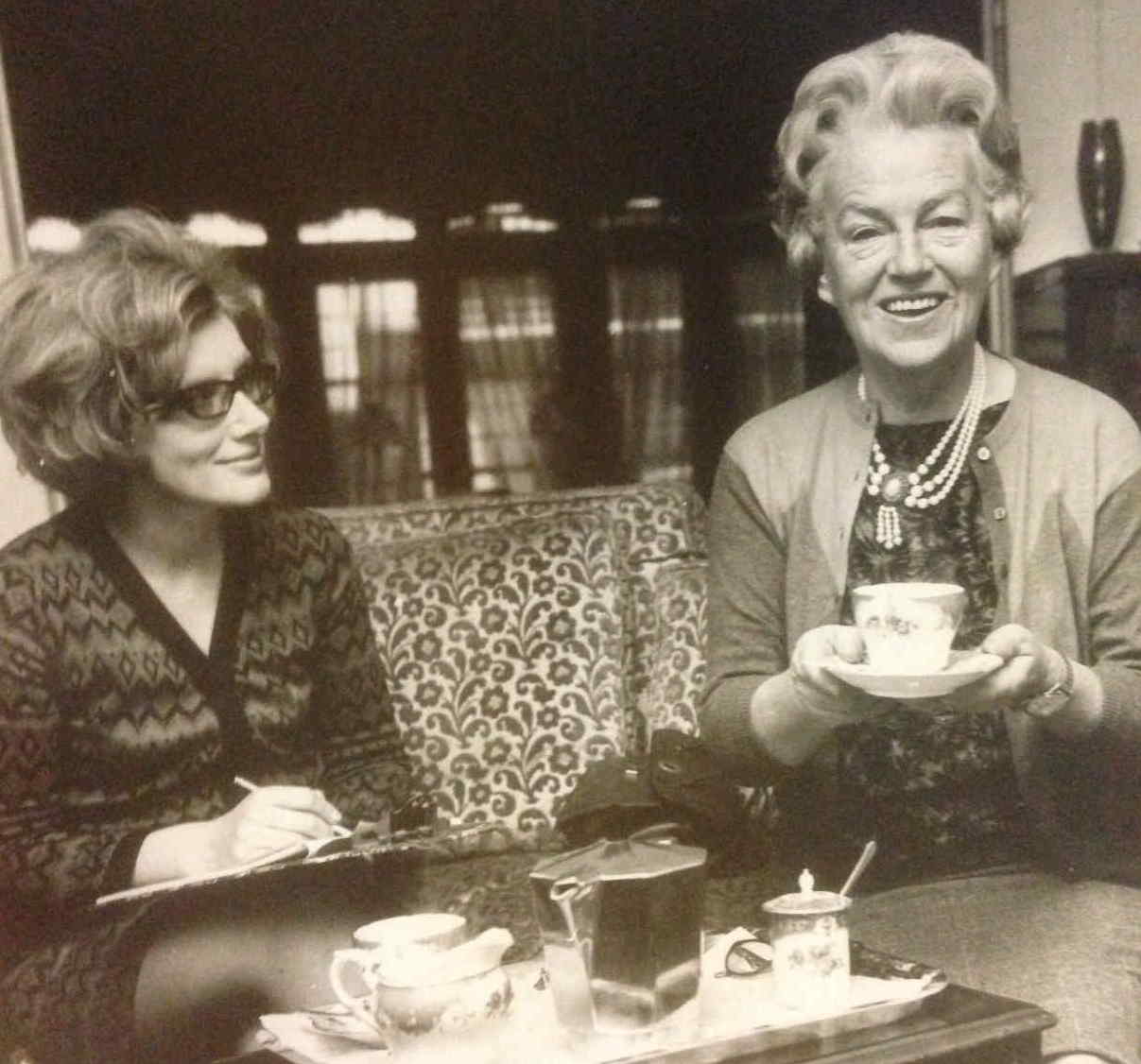 Theatre:     Haven’t got one
Play:     East of Suez
Earliest recollection:     Catching the train in the morning
Sport:     Swimming
Hobby:     Dress making
Cigarettes:     Don’t smoke
How would you make London brighter:     Firework displays all year round
Ideal holiday:     Rushing round Paris for a week and coming back dead tired
Dressmaker:     Myself
Lucky Day:     Pay day
Favourite Restaurant:     The 12.15 to Brighton
Dish:     ‘Tater pie
Greatest ambition:     To sing in Opera
Motto:     ‘Do unto others…’
When do you feel at your worst:     When singing a new song
When do you feel at your best:     When it’s a success
What would you do as PM for the day:     Have the day off
Opinion of bridge:     Don’t play, so I can’t say
Pet:     An Airedale
Pet aversion:     Talking over business matters
What would you do if not connected with the stage:     A boatman at Tahiti
Favourite Christian name:     Patricia

Does your mother fill a big place in your life, and why?:     Yes she does. She’s made me do the things I’ve done ever since I was a little girl. When I had to get dancing lessons it was she who found the extra money by doing some extra work herself. She’s always been a severe critic of my work, and she’s still boss where my career is concerned. If she doesn’t approve of a song or anything else in my work, she’ll look at me and say ‘That’s not my Gracie.’ Is it any wonder she fills a big place in my life and my heart? 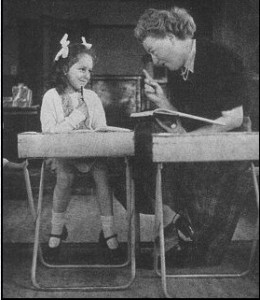 If you had to choose between your sense of humour and your equally wonderful personality, which would you choose?:     A sense of humour. That makes up for a lot of other losses, helps you keep your perspective in life and see the funny side of things…and make other people laugh with you, that’s a good thing too.

What was the worst moment in your career?:     The time I went on the stage at Oldham and sang one song while the band played another. I was so nervous I forgot the new song I’d learned for the occasion. Neither the band nor myself decided to give in!

What inspired you to set up your famous Orphanage at Peacehaven?:     I was at a big charity ball one night and an appeal was made from the platform. I had a happy enough time when I was young, having a real jolly family of my own, but I’ve seen, as other have seen too, that the children of variety actors and actresses can have a real rough deal at times. I though here was a good chance to do something useful and, if any of them want to carry on the family tradition on stage, perhaps I’ll be able to help a little.

If you could start your life over again, would you choose the same career?:     Yes!

What was the most thrilling experience of your life?:     The night I first appeared in Topsy and Eva on the London stage. This happened suddenly without much preparation, when one of the Duncan Sisters fell ill just before the show opened It’s lucky I had to be blacked all over -the audience couldn’t see the jitters so well in the first act. To begin with I was terrified, but the audience gave us such a reception I began to feel thrilled instead of frightened.

What experience is likely to live longest in your memory?:     The day I went on board the pleasure steamer called after me, and saw all the seats, life bouts, boats and other things marked with my own name.

What would you do if your voice ever left you?:     Take up knitting…I began a scarf for a soldier once, but the war was over before I finished it!

Do you enjoy seeing your own films on screen?:     Not much. They usually make me feel tired, especially if there happens to be a lot of running up and down stairs…I go through it all over again and again in my mind, but I enjoy making films much mre than I used to at first. I hated the little bits and pieces then, because I din’t understand film technique. Now I love it.

Which songs do you enjoy singing best, comic songs, sentimental or really good highbrow music?:     Depends on the mood I’m in. If I’m feeling good I like a good song. If I’m downhearted there’s nothing like a comic song to cheer me up.

What is your favourite role in films?:     Sally in ‘Sally In Our Alley.’

Has ambition anything further to offer you?:     If it is ambitious to want to do a job well -then that’s my ambition.

What do you feel like when you appear on the stage before a cheering audience?:     Hope to goodness I won’t let them down.

Which is the best Christmas you have ever spent?:     Any one where the family has been. This year we had a huge family party, including all the kids from the orphanage. We had a gradeley time.

What would you do if you were not a film star?:     Be a trick cyclist or an acrobat.

Which of your various homes do you like best?:     Peacehaven.

Is it true that you do not welcome fan worship?:     On the contrary…so long as it does not interfere with my work.

If you had a daughter of 14 very keen on stage work, would you let her take up the profession?:     Yes.

What resolutions are you going to make for the New Year?:     None -never manage to keep them, so am giving up the habit.

Why -with your superb voice, do you not sing in Grand Opera?:     Because opera singers begin their training when they are young, and when I was young we couldn’t afford the expensive training.

What was your impression when first facing a large audience?:      Don’t remember. Have faced audiences ever since I was seven, so it wasn’t a new experience.

Did you attend Bailey Street School in Rochdale?:     No, the Parish Church School.

Why did you chance the colour of your hair?:     As a matter of fact, I’ve really gone back to my own natural colour…the way it used to be when I was sweet 16!

Where did you learn to play those tricks with your voice?:     I don’t remember. I’ve always done them. I used to get ‘sloshed’ as a kid for doing them.

Is it true you are going to make films in Hollywood?:     It is almost definite that I shall go to Hollywood for one film -but whatever it is, I shall still be British and have no intention of changing my own personality. I’d like to go to Hollywood, I enjoy getting around and seeing new things -it makes you appreciate your home all the more. 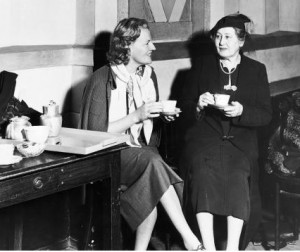 Question answered on a postcard

What do you miss about England living in Capri?:

– What I miss in Capri, is our very lovely English soles , plaice, kippers & Finn’an haddock. The rest of food if it’s to be an English dinner, I can cook myself, such as the roast of beef and a good real good Yorkshire pudding, ect. That’s about all I miss in the food line.

– As you’ve said, we all miss our family and friends, and a good old chin wag.

– I may seem a bit daft, but I like a real foggy day, (although it doesn’t agree with me) I love to get lost, and like the rain if I’m dressed for it. It’s great to feel it rdizziling – here it comes down mostly rropical, just a bit too heavy.

I hope this is what you want.

Nothing But The Truth

Any more ambitions in show business?:    Always. Ambitions to do something a bit different.

What is your favourite medium as an artiste?:    Acting

Is Capri still your idea of paradise?:    Yes, when I feel like relaxing.

Have you lots of jewellery?:    No, just a few stage props. I’ve never been interested in jewellery and its too much to look after nowadays.

What is the oldest item in your wardrobe?:    Me.

How many minks do you possess?:    Just one. And I find it very heavy and a nuisance.

Do you go in for the fashionable hair tintings or facelifts?:    I have my hair tinted now -but no face lift. Afraid they’d lift it too far!

Why have you lasted, when so many contemporises are now museum pieces?:    I guess I still have a lot of wim, wigour, and witalitity! 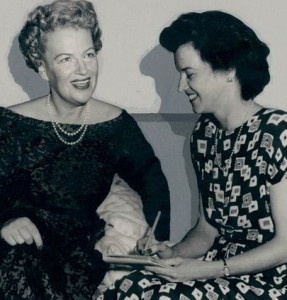 Talent and personality apart, what keeps a star at the top for always?:    Working hard and being sincere in every possible way.

What would be your tip to the big money, overnight teenage stars of today?:    Save it, lover, while they’re paying it out.

Will they -can they- last?:    Yes, a few. Those who try to improve and remember to work hard for those good folks who have paid to hear them.

Is there as much genius talent in show business as in your youth?:    I should think more -they have a wonderful chance to see and hear every big star on TV

How long did it take for you reach the top?:    Many, many years.

How many servants do you keep?:    Two -but I think they are winning. I still seem to do my own fussing about the house.

What do you do when you’re not working?:    I never stop working -either starring or charring.

Are you sorry you never had a family?:     Yes -but I have some lovely nephews and nieces.

Your definition of glamour?:    Marilyn Monroe

Do you ever return to your old friends and neighbours in Rochdale?:    Yes, but most of the friends I knew there were my mother’s contemporaries, and unfortunately there are very few left now -just Auntie Margaret, her husband and three of four very special friends.

What was the best advice you were ever given?:     Never get a big head.

Is there anything a lifetime in show business has taught you?:    Yes. It’s still hard, but satisfying work.

Who has been the greatest influence on your life?:    My mother.