I have recently had the pleasure of talking to the grandson of Lily Turner, the music hall singer who helped put Gracie on the stage. Graham Langton is very happy to share what he knows of Lily, and would be very grateful if anyone can add anything further. 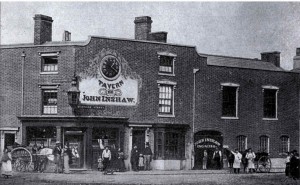 ‘Steam Clock Tavern’ c1885 The music hall to the right

Born in Birmingham on the 3rd January 1884, Lily took to the stage at the tender age of eight, performing in ‘Montague Roby’s Famous Midget Minstrels’ at what was the ‘Steam Clock Tavern and Music Hall’ in Ladywood, Birmingham. At the age of 18 Lily went solo, performing her own boy impersonator act using her maiden name, Lily Turner. 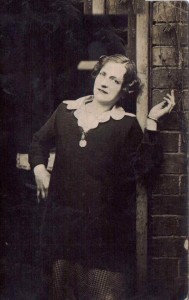 A very theatrical pose from Lily 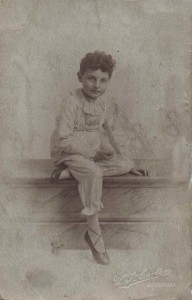 Four years later Lily married Charles Langton, a ‘metal broker’ from Rochdale (Graham Langton told me ‘metal broker’ is a posh way of saying a ‘Del Boy’ character!). It was whist she was courting Charles that she first met Gracie while she was ‘resting’ in theatrical digs in Baron Street, Rochdale. 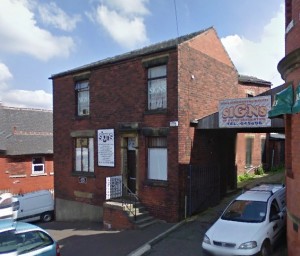 Believed to be the theatrical boarding house in Baron Street

Following her marriage, again living in Baron street, Lily had four pregnancies in five years. Tragically only one of her children living past early childhood, this was Roy, Graham’s father. Lily continued to tour during the 16 years following her marriage as a ‘versatile singer’ under the floral name of ‘Rose Bush’, finally settling down, coincidentally living at 51 Molesworth Street until her death.

Family tradition says Lily was so well thought of as a music-hall star, that George Formby senior wrote and published songs for her, though we have yet to trace anything to verify this, if you know more please do contact us. 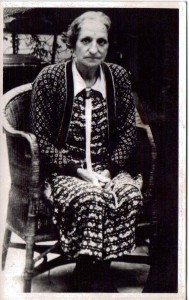 Lily shortly before her early death

Following Lily’s early death at 55 in1939 from heart trouble Roy disposed of most of his mothers belongings on a bonfire, only very few documents and photo’s being rescued. Included in the losses was we assume, the brown velvet dress that Gracie wore for her first professional engagement, when touring briefly with Lily (before joining the juvenile troupe’s). Lily having kept the dress after falling out with the cantankerous Jenny Stansfield following some kerfuffle over Jenny not returning Lily’s wedding dress ! 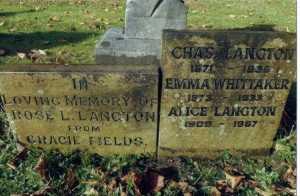 We should all spare a thought and raise a glass to Lily Turner, how differently would Gracie’s history read if Lily had not stepped in when she heard Gracie scrubbing out those lavvies ? Thank you Lily.

A recently unearthed interview tells of the meeting between Gracie and Lily in Lily’s own words . . .

I want to tell you how I helped Gracie Fields to her first success when she was a very little girl. It makes me feel very proud, in the view of Gracie’s fame to-day, to think that I helped to put her on the stage.
She came to my notice while I was in Rochdale giving my turn at the old Circus here, twenty-eight years ago. I was lodging in Barron Street, and Gracie and her parents lived across the road. While I was there, Evelyn Taylor was running a competition at the Circus on her then famous song ‘What Makes Me Love You As I Do?’
I had bee attracted to Gracie by hearing her singing while at play in the street, she was only about seven then – and I suggested to her mother that she should enter for the competition. Mrs Stansfield, her mother agreed, and I taught the child the chorus and the verse of the song. At that time Gracie’s voice was very similar to what it is now.
As there was no piano where I was staying we went in next door to learn the song. Despite her youth she won the competition. Actually she was too young to be eligible to win it, but I happened to be popular at the Circus then, and I contrived to get the age question waved.
Following this I gained her parents’ consent to take Gracie with me to sing the chorus of my song from the gallery in various theatres. It was to be a sort of novelty, and I paid her 7s a week and kept her. At that time I was singing a song ‘A Time Shall Surely Come Some Day’ written for me by George Forter, the Bradford comedian. It was the chorus of this song she sang.
During the three months she was with me I got Gracie a trial turn at the Hippodrome Stalybridge. She sang one of my songs ‘No One Like Mother, No Place Like Our Home’ written for me by Pat Duddy, of Liverpool. While we were at the Empire Theatre Burnley, Charbourn’s Juveniles were top of the bill. On hearing her sing they offered her more money and she left me.
I got married about this time to Charles Langton, a Rochdale broker, but after a little I continued to go touring, returning home to my husband and son periodically. During the war years I started to appear in Scotland as Rose Bush, and I toured the whole country. The song I put on was a marked success. It was ‘Don’t throw Stones at Anybody’s Windows’.

Whilst Gracie and her family were living in Baron Street, Rochdale, Gracie earned an extra few coppers by cleaning the neighbours outdoor lavatories – they were living opposite a theatrical boarding house at the time, and Mumma was always reminding Gracie to ‘sing loudly’ whilst scrubbing, hoping one of the theatricals might hear ! 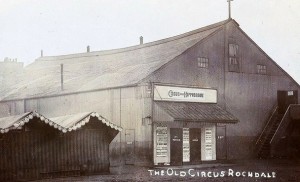 This indeed happened when a music-hall singer from the midlands called Lily Turner was ‘resting’ for a few weeks in the Baron Street digs. Lily was so impressed with Gracie’s singing that she suggested to Jenny that she should allow her daughter to enter a singing competition at the Rochdale ‘Old Circus and Hippodrome’ (even though Gracie was only seven years old, and the lower age limit for child performers was at that time 11).

Lily then gave Gracie the one and only singing lesson she ever had in her life, Gracie spoke about it in later life in an interview with Russell Harty . . . 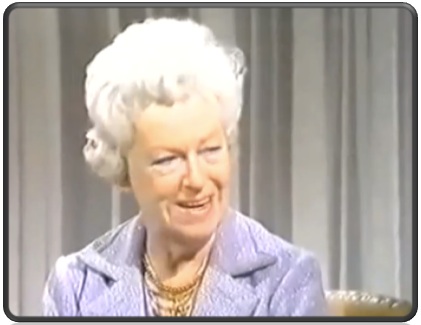 Gracie tied for first place in the competition, winning ten-and-sixpence, which is 52.5p in the new money! 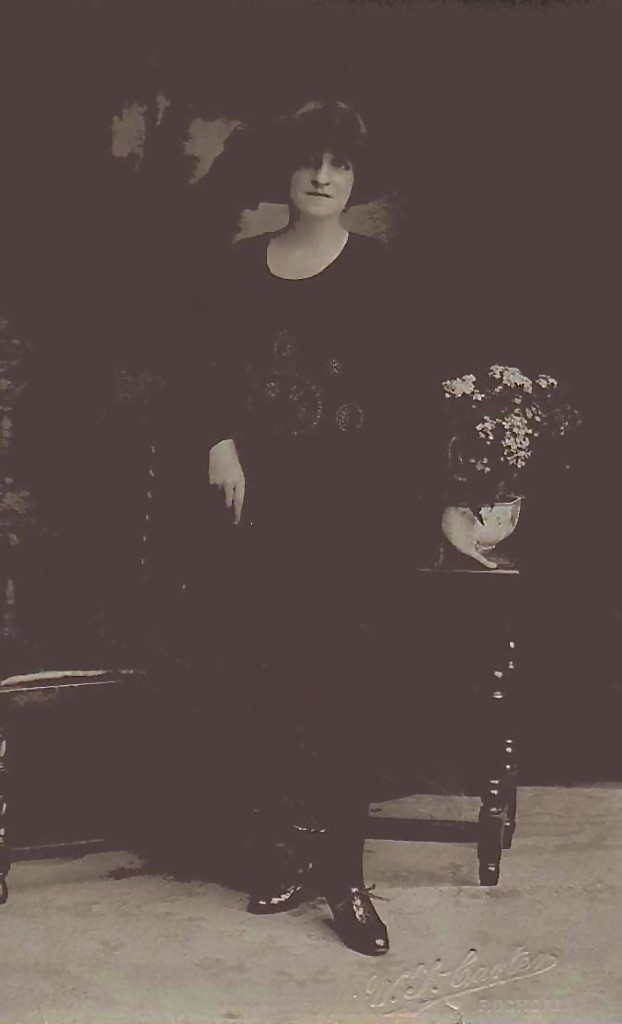 When Lily again started touring locally, Jenny persuaded her to take Gracie on the stage with her, their first performance together being in Burnley, 18 miles from Rochdale. Originally the act had Lily on stage and Gracie singing the chorus from the balcony, but after some confusion with the audience as to whether this child was part of the act, or just a precocious ‘heckler’, Gracie joined Lily on the stage. 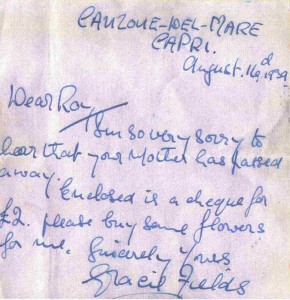 Gracie tells the story that Mumma wanted the brown velvet dress with pink ribbons that she wore on stage to keep as a keepsake, but Lily refused, keeping it in her own possession. It has long been a dream that we might one day rediscover this dress. Unfortunately this hope has been dashed by Graham telling me that his father disposed of all Lily’s effects after she died, apart from a very few photo’s and documents.