Perched high upon a hilltop overlooking Hollywood, Calif., is this castle-in-the-air’ – still unfinished after 20 [?] years of intermittent building and planning by a succession of owners. There are living rooms and fireplaces and a dining room on a grand plan, but they have never been roofed. Present owner is Gracie Fields, British comedienne – who, rumour has it, may complete the dream castle this year. 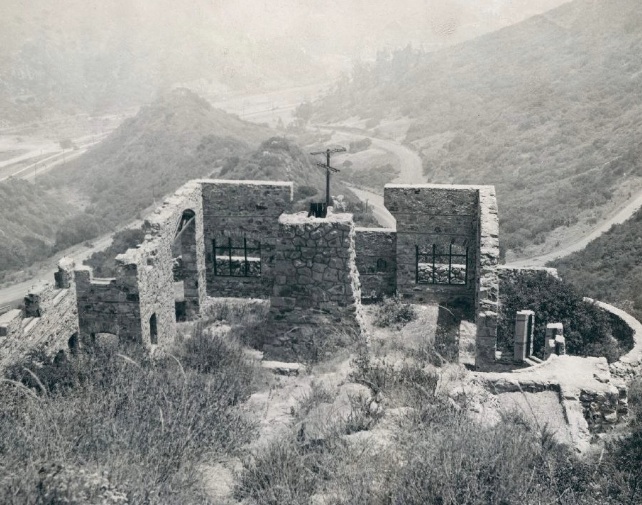 Gracie Fields has bought a house in Hollywood but her vast and faithful public over here need not worry.
Gracie has no intention of living in it -at any rate at present.
The house, on a mountain top, is only half built. It was started two [?] years ago, but the owner moved to another district when the walls were only partly up. Gracie has not completed the building, and she may never do so.
She told me all about it yesterday on the telephone from Brighton, where she is appearing this week. ‘I really bought the house to help a friend who needed the money‘ she said, ‘but I thought it might come in useful if I had to make films in Hollywood.’
‘Then the Twentieth Century Fox people decided that I should make my next film in England, so I was left with the house on my hands. I shall probably retain it for a time in case I do have to make a film in Hollywood sometime. But all my friends here can rest assured that if I do ever live in the house, it will only be a temporary measure while filming. I have no intention of ever deserting England.’