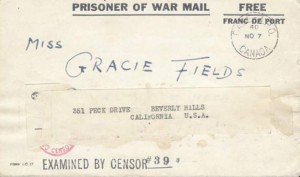 A POW using up his precious mail allowance writing to Gracie

In the late 1930’s Gracie bought a property in Beverly Hills. As Gracie’s mother was having health problems and she had been advised she needed a warmer climate she moved to the apartments with Fred (Gracie’s father).
In July 1940 when Gracie and Monty were leaving England (due to Monty being threatened with being declared an ‘Enemy Alien’) Gracie filled in her visa application, putting her parents present address as 353 Peck Drive, Beverly Hills, California, and that she and her husband’s destination was 9601 Olympic Boulevard, Beverly Hills, California, (Her UK address as the Dorchester Hotel). This is slightly confusing as it’s the same building, (though Gracie refers to it, in her typical unspoilt way, as a ‘block of flats’). 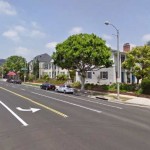 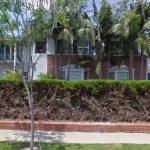 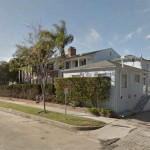 In July 1946 there was a bit of a kerfuffle when Gracie was sued by Irving Cummings over the sale of the property . . .

Cummings demands  that  they  proceed  with

the  sale  of their Beverly Hills house to him, or

Cummings  claims  that  last July he agreed to

5,000  dollars as a retainer. Consummation of

the  deal  was  delayed a year while the couple

made a world tour.

Cummings says  that when they  returned, they

refused  to  sell  the house. He  claims that  the