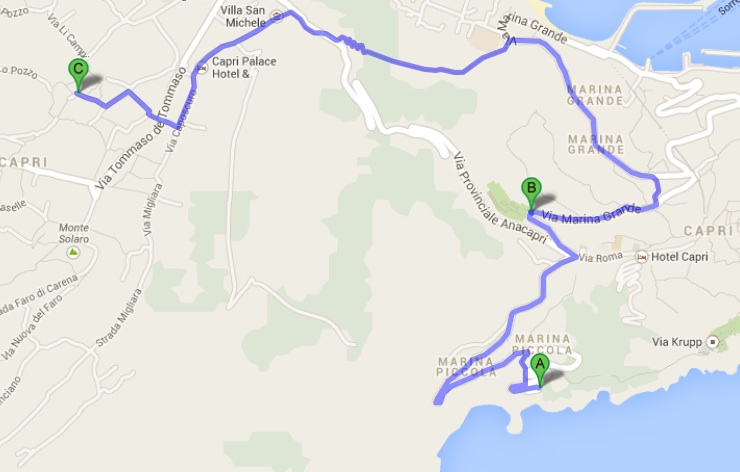 A)    La Canzone del Mare
Gracie first visited here in 1929, moving in to the property formerly known as ‘Il Fortino’ a few years later. The building was originally an English defence fort, with its own prison, but was a rundown property when Gracie bought it. Over the years, she developed the house and grounds –adding lemon, orange and olive groves and planting an array of flowers. In the late 1940s, Monty and Gracie began renovations on the beaches and rocks below the property to create ‘La Canzone del Mare American Bar and Pool.’ At first, there was an English Tea Room, but this was later abandoned. This became a bathing establishment, bar and the ‘place to be’ in Capri, frequented by Hollywood’s elite. Gracie and Boris leased the restaurant and pool to the Lacono family in the 1970s. After Boris’ death the property was eventually sold by the Stansfield family, and is now owned by Fiona Swarovksi, whilst he Lacono family still own the restaurant and bathing complex, and have recently converted the small buildings (used to house Gracie’s staff) into five holiday apartments, known as the ‘Diva Suite.’

B)     The Non-Catholic cemetery
The final resting place of Gracie and Boris, buried in a white marble tomb guarded by two aspidistras from Gracie’s property. While Gracie’s tomb was being created, the Cerio family allowed Gracie to be laid to rest in their family tomb –which is next to the plot where Gracie now lies.

C)     Via Finestrale, Anacapri
This was Gracie and Boris’ ‘other house’ on the island, and where Gracie retired to during the Winter months when La Canzone had closed after the Summer season. Gracie often refers to this in her letters as “Going up the mountain.”