On January 8th 1938, the Rochdale Observer started a campaign for the commission of a painting of Gracie, to be presented to her from her townspeople. A request of ten thousand shillings was made, and by February 9th 15,046 shillings had been raised for the painting’s fund. All the donations were kept in a special ledger detailing the names of the doners, with the first donation made by Bertha Schofield. 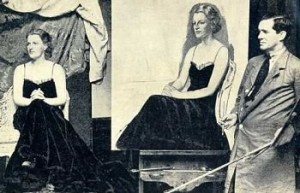 Scottish Royal Academy artist Sir James Gunn was approached to undertake the commission, which was painted over a number of sessions that Summer in Gunn’s Glasgow studio. 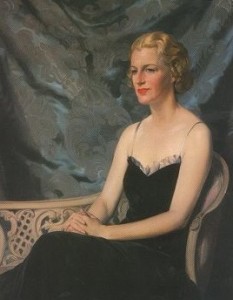 Gracie returned to Rochdale on November 5th to receive the painting in oils. Taking to the stage at the Regal Cinema in the afternoon, following a luncheon at the Town Hall, the Mayor of Rochdale, Mary Duckworth, introduced the “wholly unspoilt” Gracie and presented her with the painting. Gracie was pleased that “He’s made me right nice-looking!” before singing a few numbers accompanied by Harry Parr-Davies.

Gracie returned to London that same evening with a cheque for her Orphanage  (the remainder of the balance from the portrait fund). In the first week of the portrait being hung in the gallery, over 14,138 people came to visit it. 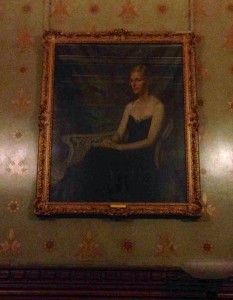 The Gunn portrait now back on display in the Mayors Parlour

In 1947, the painting underwent some restoration work and was placed behind glass. It lived for many years in the Rochdale Art Gallery, before moving into the Town Hall and finally to the Touchstones Museum Arts and Heritage Archive. As the Mayor’s privilege each year, they have the free choice of which paintings from the town’s collections hang in their parlour in the Town Hall. As of December 2013, at Mayor Rush’s choice, the Gunn painting is currently on display in the Mayor’s parlour.