This page may not be to our tastes today, but it is part of Gracie’s history and so must have a place here. And going by the standard of the day, I’m sure Gracie made a very tasteful job of it, if that were possible. 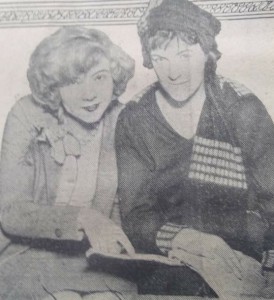 On 16th November 1928, Gracie agreed to take over Rosetta Duncan’s role in the production of ‘Topsy and Eva‘ at the Gaiety Theatre, London, as Rosetta had suffered a breakdown through over-work. The show, which was a musical version of ‘Uncle Tom’s Cabin‘ was being personally financed by the Duncan Sisters, at an investment of £10,000 each, and was looking likely to be shelved. The character Topsy, was on stage almost from beginning to end and two performances had already been cancelled.

Lunching at the Savoy Hotel (where the Duncan’s were staying), with Archie, Gracie heard about their problems and agreed to ‘step into the breach‘ and take over the role – seemingly at Archie’s suggestion. Gracie agreed there and then to do the show, and went straight to the theatre, from the Savoy to begin rehearsals on the 50 pages of script, and her new song, ‘Why Does the Hyena Laugh?‘

Why Does the Hyena Laugh? 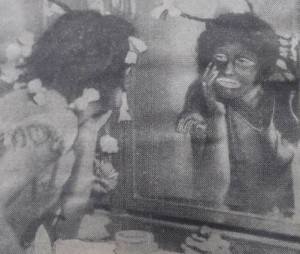 The pressure was raised when the newspapers announced that Gracie was to take over the role in ‘Topsy and Eva,’ Gracie stayed awake all night with a vinegar bandage wrapped around her head as she tried to learn the lines and routines. In doing so, Gracie got a stiff neck and Auntie Margaret provided a continual supply of tea. Rehearsals continued through the afternoon of the 17th of November, with Gracie opening the show that very night (after only a day’s rehearsals!) 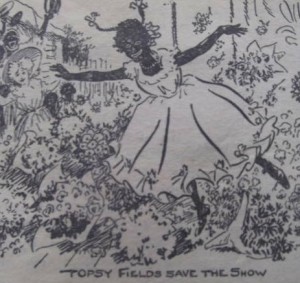 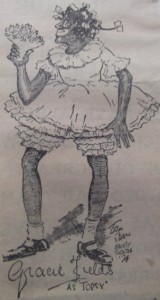 In her autobiography Grace remembers being nervous as she stood in the wings, before she gave the ‘saucy laugh‘ which signalled her entrance to the stage, followed by her first line, ‘I’s a wicked girl, I is!‘, Gracie says it was down to ‘Doctor Footlights’ that she ‘went on’ at all. As she got on stage, the stiff neck disappeared and she went on with the show. Her greatest fear was that her ‘attempt at an American voice will not be too funny‘. But the audience were carried along for the three hour show by her versatility, her dancing and her playing the fool. 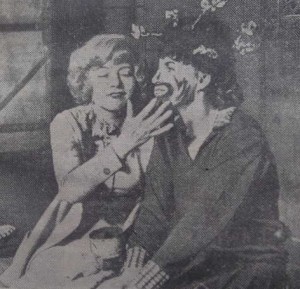 For two acts of the show, Gracie stuck solely to the script as rehearsed, but in Act Three she lapsed back into her native Lancastrian and performed a solo set of songs as Gracie Fields – but still in black face – singing her popular numbers ‘My Blue Heaven‘ and ‘We’re All Living at the Cloisters,’ which ‘bore no relevance to Old Virginia, and more to Lancashire or the Music Halls of Leicester Square‘.

At the end, the audience appreciated her greatly and it is on this occasion that she was carried down the length of the Strand by well-wishers, and NOT on her opening of ‘Mr Tower of London’, as erroneously cited elsewhere. A similar event occurred on the 19th of November, when Gracie had to stay in the theatre for fifteen minutes, and be escorted out of the stage door by Police due to the crowds, with people climbing onto the roof of her taxi. 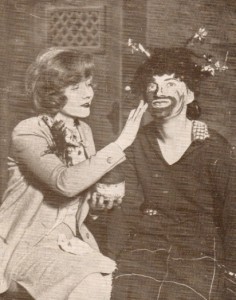 The newspapers suggested that the act of generosity ‘at considerable personal sacrifice‘ was ‘typically Gracie‘, with her secret being ‘just hard work and determination‘ which got her through line learning. On the opening night of Gracie’s engagement the show saw takings of over £100 at the Box Office, however Gracie insisted that she didn’t want any salary for her performance. Gracie was only able to stay with the show for a week, due to ‘The Show’s the Thing’ opening, but her week with the show was well publicised and saved the Duncan Sisters’ investment. 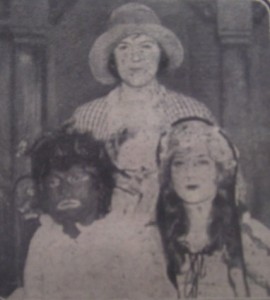 Gracie left the show on the 26th November, and was replaced by Mimi Crawford. After only two days in the role, Vivian Duncan decided that she wasn’t right in the role, and so they switched parts, with Vivian taking a lot of performance tips from Gracie’s portrayal of the character. Rosetta Duncan returned to the show on December 1st.

‘If any fun the show now yields, the thanks are due to Gracie Fields’!