In 1942 Nancy Hamilton wrote a second script for ‘Mary Poppins’ in the hope that Gracie would play the part, unfortunately this wasn’t to be, Gracie writing in the third person to Miss. Hamilton ……

“You’ve done a grand job, but I’m so sorry, I still can’t see GF playing MP. Something more down to earth will have to be written for me”.

The above letter was written very shortly after ‘Top-Notchers’ closed, Gracie goes on to say she is now returning to Santa-Monica to rest.

* Singer, actor, playwright, lyricist, director and producer, in 1955 Nancy Hamilton won the Academy Award for the Best Documentary Feature for ‘Helen Keller in Her Story’, directed, written and produced by Nancy. 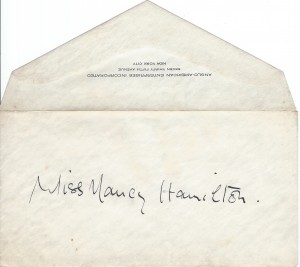 I am indebted to the owner of the correspondence between Gracie and Nancy for allowing me to include it here.