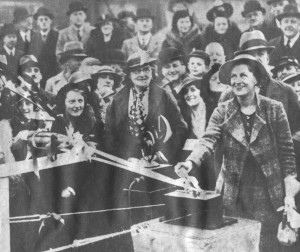 Pulling the switch to release the Champagne

Gracie went to Southampton on April 8th 1936 to launch the paddle steamer ‘Gracie Fields’ built by J Thornycroft for the Isle of Wight Steam Packet Company.

A couple of seconds after Gracie let the Champagne go, someone had to remind her to name the boat, Gracie shouts, ‘Gracie Fields goes to sea’.  Then as the steamer slid down the slip-way Gracie gave a spirited rendition of, ‘Sing As We Go’ then the crowd joined in with ‘Sally’. 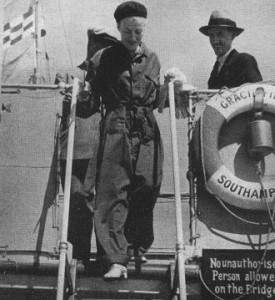 Gracie disembarking after her trip with the orphans

Shortly afterwards, on the 26th July 1936, Gracie chartered the steamer to take orphans on a trip from Bournemouth to Brighton, where she was performing. 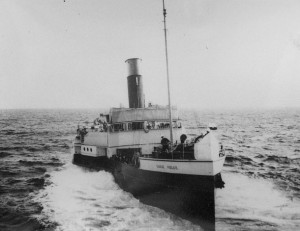 The original open bridge, and the raised forecastle, designed to keep the spray off the cars she carried in her well deck, on the Southampton to the Isle of Wight run

The paddle steamer was taken over by the Admiralty at the beginning of World War II for service as a mine-sweeper.

She also saw service evacuating British soldiers from the Dunkirk beaches. After one successful trip on May 29th she was hit by a bomb from a German aircraft and was badly damaged. Her crew were taken off by HMS Pangbourne, which also attempted to tow her home. However, her rudder was damaged and she was taking on water. 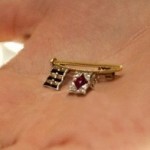 Gracie was given a brooch by the Isle of Wight Steam Packet Company when she launched the steamer. It was in the form of two signal flags spelling out Gracie’s initials GF. 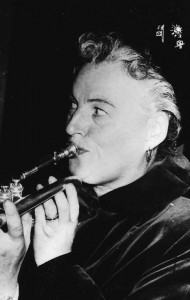 She wore it often with great pride, pride both for the boat and for the valuable part she played in rescuing British soldiers in the Dunkirk evacuation. 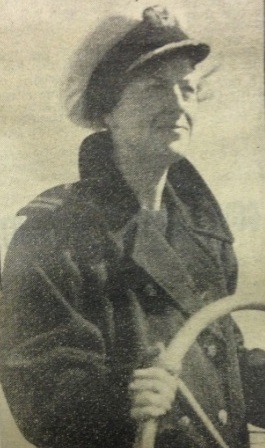 Gracie at the wheel of the S.S. Gracie Fields on a charity day in 1936