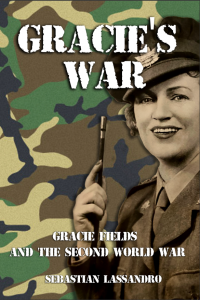 Almost as soon as I’d published the biographies ‘Pride of Our Alley’ in 2019, new information came to light from archives which had previously been inaccessible and released information on a rolling year-to-year basis.
Having been working on it for over a year, I now present ‘Gracie’s War.’
For the 75th anniversary of the end of the Second World War, I’ve revisited Gracie’s 1939-1945 efforts, as a companion piece to complement the original biographies. I felt it necessary to paint as complete and intimate portrait of her War Years as possible, rather than keeping important research about her tireless contributions unpublished.

Gracie has largely been ignored in the 75th Anniversary celebrations, and her important and significant war efforts should not be forgotten or overlooked.

If you haven’t read the other Gracie books, this DOES work as a stand-alone book (which I’ve contextualised) for anyone interested in just the Second World War. If you have, there are many new changes and alterations but more importantly, new additions.

After re-editing, formatting and re-writing sections of the original, I’ve added over 11,000 new words of research to Gracie’s War – giving new dates, anecdotes, reviews and appearances and including new photographs. (Particular focal points were Gracie’s 1941 and 1943 UK tours and her 1945 Australasian tour, which I’ve expanded upon).

In total, ‘Gracie’s War’ is 283 pages. In her own 1960 autobiography, Gracie covered her complete war years in less than 4 pages.