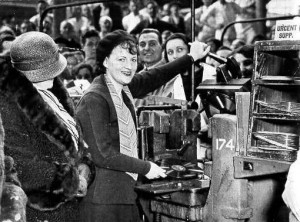 A spoken invitation was sent out, on a 78 record, for a ‘Lancashire Lunch’, to celebrate the pressing of Gracie’s four millionth 78 record, ‘Play Fiddle, Play’ on Feb 14th 1933. 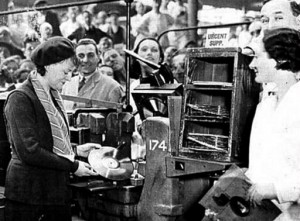 There is a ‘Pathe News’ film showing Gracie at the HMV factory in Hayes pressing the record, and singing ‘Looking On the Bright Side’, to, and with a vast crowd of factory workers having a welcome holiday from the presses. An interesting aside, is that manufacturing Gracie’s records kept 120 people employed at the factory!

Link to the Pathé News page >> 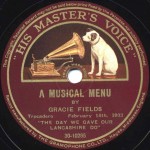 After the factory visit Gracie held a traditional Lancashire Lunch at the Trocodero Hotel near Piccadilly in London. When guests arrived at the party another special record was given to them. This had ‘Play Fiddle, Play’ on one side, and ‘The Day We Had Our Lancashire Do’ on the other: a full comedy song as good as anything she released, (and a good deal better than some!). In it she makes reference to many of her other comic songs. 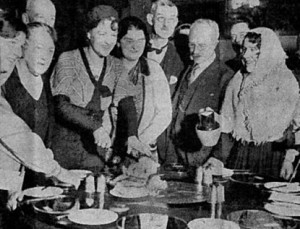 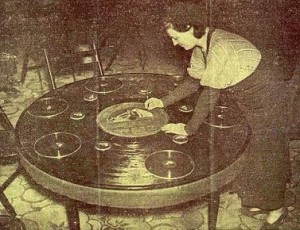 ‘The Day We Had Our Lancashire Do’

Well lads and lassies, this ‘eer songs been written specially for this ‘ere do we’re

having today, an I hope it’ll be a good do,  well I know it will.

it really was a very posh affaire.

We celebrated fathers fourteenth year upon the dole,

and all the local unemployed were there.

So we pawned the aspidistra in the old art pot,

and grannies old skin rug it had to go.

And our very last resource, was to serve up every course,

in the little pudding basin that belonged to Aunty Flo. 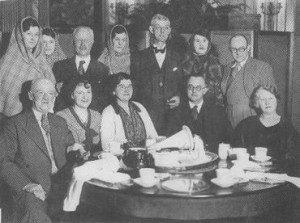 On the menu there was, (amongst other Northern delicacies), fish and chips, hot pot, apple pudding and strong tea. A jug of ale was also served, presumably for the chaps. Many of Gracie’s family were there, along with many friends from her life back in Rochdale. 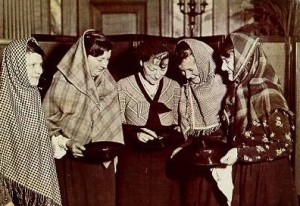 Signing records for the waitresses

The waitresses dressed as mill workers, and the tables were designed as giant 78 records, with record placemats, and record label drinks mats. They have one of these tables in Rochdale museum stores, and there is another one rotting away, unloved in ‘La Canzone’, Capri.