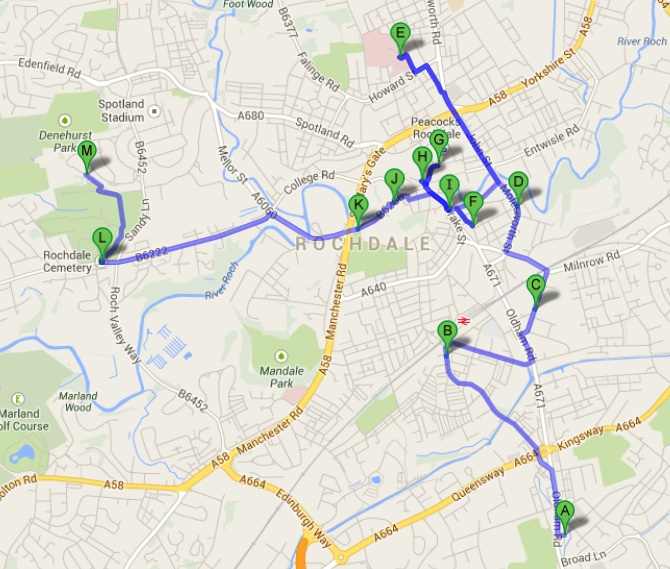 A)    Hughtrede Street
The Stansfield family were known to have lived in Hughtred St for a time when they were “going oop”. It was while living here, in 1914, that Jenny Stansfield signed Gracie’s first professional contract to join Percy Hall’s agency and star in ‘It’s A Bargain!’

B)     Milkstone Road
Formerly the sight of the Schofield’s corner off-licence. Bertha and Ada Schofield were close family friends of the Stansfield family, and Gracie always visited them on her returns to Rochdale up to the 1960s. Quite often in the 1930s, when playing in Rochdale, Gracie lodged with the Schofields.

C)     Fishwick Street
Site of Touchstone’s ‘Arts and Heritage Resource Centre’ accredited with full museum status. They hold and care for an extensive Gracie Fields archive which can be viewed on request. Their collection includes many of Gracie’s personal belongings donated to the town, including certificates, awards, scrapbooks and various mementoes presented to her. Viewing by appointment. 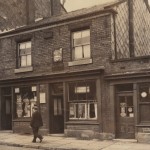 Site of the famous ‘fish and chip shop’ bought by Sarah Stansfield in 1896. Gracie was born in the upstairs bedroom of the building, and Jenny and Fred lived here with Fred’s mother for a number of years. The family eventually moved out, and the building remained a fish and chip shop into the 1960s when it was demolished. In 1953, Alderman Bryning self-funded a plaque for the building, which remains on the spot to this day. There are plans currently to redevelop the current empty site in honour of Gracie.

F)     10 Baron Street
The Stansfield family were known to have lived at this property for the longest period of time. It was here, close to a theatrical boarding house, that Gracie was ‘discovered’ singing and taken to join Charburn’s Young Stars.

G)    The Wheatsheaf Shopping Centre
Opened by Gracie on her final visit to the town in 1978. There is a plaque on the entrance of the shopping centre commemorating this event.

H)    The Regal Moon Cinema
Now a Wetherspoons pub, so you can call in for a drink mid-tour! Gracie performed in a charity concert here in April 1949 on her return to the town. There is a photographic display of Gracie on one of the walls inside the pub. 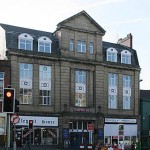 I)      The Champness Hall
Gracie marked her return to broadcasting after the Second World War at the Champness Hall, when ‘Our Gracie’s Working Party’ was broadcast live from here in 1947. This was the first of a series of 12 weekly concerts which brought Gracie back into mainstream popularity thanks to the BBC.

J)      82-86 Drake Street, Rochdale.
The former site of the Rochdale Observer newspaper head offices. Gracie laid the foundation stone of this building on her return in 1954. This cornerstone, with faded inscription, is still visible today. 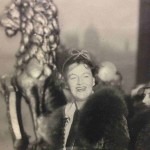 K)     Rochdale Town Hall
The epicentre of all Gracie’s visits to Rochdale, as she was often welcomed with a luncheon in the Hall; performed to crowds of thousands from the balcony and was made a Freeman of the Borough inside the Hall in 1937. At present, there is a photographic display of Gracie on show in the Town Hall, arranged between Link4Life, Rochdale Rotary and the Dame Gracie Fields Appreciation Society.

Note: In close proximity to the Town Hall are the sites of two former venues which Gracie frequently performed at: The Rochdale Hippodrome and The Rialto Cinema (which Gracie opened in 1928). Just behind the Town Hall, up a flight of steps through gardens, is St Chad’s Church. This is where Jenny and Fred Stanfield were married in 1897 and where Gracie and her sisters were baptised.

L)     Touchstones Museum and Local Studies
Have a small Gracie Fields display as part of their main gallery, and a recreated cinema booth where you can enjoy video clips of Gracie. As of May 2014, there a new exhibition called ‘Talking Heads’ features items belonging to Gracie.

M)   Rochdale Cemetery
The final resting place of ‘Chip Sarah’ Leighton. It is likely that other members of Gracie’s family are buried in the cemetery, but these have yet to be investigated. It is highly probable that ‘Auntie Margaret’ is buried somewhere in the cemetery. 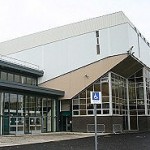 N)    The Gracie Fields Theatre
An all-purpose theatre opened by Gracie in September 1978, where Gracie made an unexpected 30 minute appearance at the first concert. A plaque commemorates the opening and there is a display of memorabilia and photographs in the theatre bar.

O)    Whatmough Street (off the map)
The Stansfield family were known to have lived at Whatmough Street for a period of time while moving “oop”. It is likely that they moved back into the centre of town.