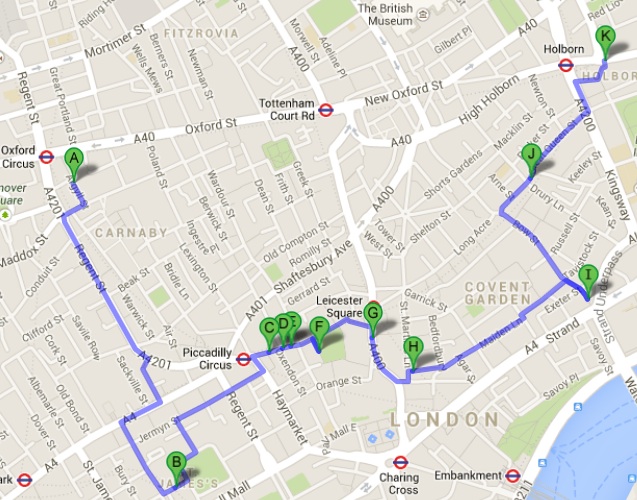 A)   London Palladium
Gracie’s first appearance here was at the reopening of the Palladium as a variety theatre in 1928 and her final 50 years later at the 1978 Royal Variety. Gracie had a season here almost every year in the 1930s, and also 1949 to 1954. She also made her ‘comeback’ here after the war in 1947 at the Royal Variety, and her first season in 1948 with ‘Take Me To Your Heart Again.’

B)   St James’ Theatre
The former sight of the St James’ theatre. Gracie made her ‘serious’ theatrical debut here as Lady Kate Weir with Gerald Du Maurier in 1928 in ‘SOS’.

C) Trocadero
This is where in 1933 Gracie held her ‘Lancashire Lunch’, thrown in honour of her four millionth record pressing.

D)   The Prince of Wales Theatre
Gracie lay the foundation stone of the theatre when it was rebuilt in June 1937. The foundation stone can still be seen on the side of the building at pavement level. In the 1920s and early 1930s, Archie Pitt rented the top floor of the old POW theatre and had his offices here. Gracie also performed here for a two week Variety season in 1956.

E)   The Cafe de Paris
In 1928, possibly the busiest year of Gracie’s career, she appeared numerous times throughout the year at this venue and made her cabaret debut at this theatre.

F) London Alhambra
Gracie made her West End debut at this theatre in July 1923 when ‘Mr Tower of London’ visited the theatre. It returned the following year. Gracie also played this theatre frequently in Variety bills.

G)   22 Charing Cross Road
The Aza Agency’s Head Office. Sometimes given as Gracie’s address. It may only have been a mailing address, or she may have had rooms in the building at some point for when she was visiting London.

H)   London Coliseum
Reputedly Gracie’s favourite theatre. She made her first Royal Variety appearance here in 1928. Gracie also played her first solo professional engagement at this theatre in 1924 which also may be the reason for her love of this theatre.

J)   Winter Garden, Drury Lane
The second, and short lived, home of ‘The Show’s the Thing’ during its London run in 1929. Also the London home of Gracie’s last theatrical review ‘Walk This Way!’

K)   The Holborn Empire
The site of the former Holborn Empire where Gracie frequently played during the 1930s. A recording was made here of Gracie’s 1933 performance by HMV and issued on three 78 records. (A different performance was issued on Regal Zonophone).

Apollo Victoria
The original London home of ‘The Show’s the Thing’ during the first few months of its London run in 1929.

Collins Music Hall
This is the theatre where Gracie made her London debut. The building is now a Waterstones book shop and is visible from the windows of the apartment Gracie and Archie shared on Upper Street Islington.